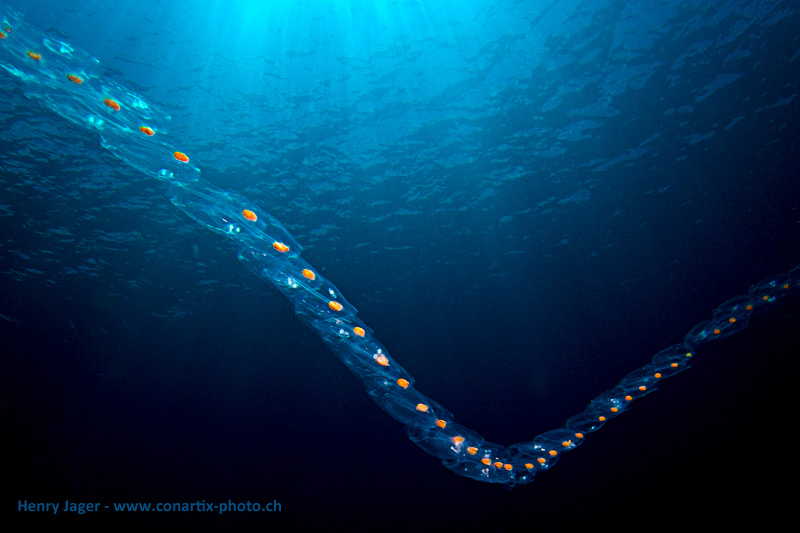 ‘Aliens’, ‘jelly-balls’, ‘globs’, ‘buckets of snot’, and ‘sea-walnuts’. These are the names media have used to describe salps, as mentioned by Nereus Fellow Natasha Henschke, Princeton University, in her recently published paper “Rethinking the Roles of Salps in the Ocean”.

“Salps are barrel-shaped gelatinous zooplankton; they kind of look like jellies but they don’t have any tentacles. As larvae, they have this thin notochord that is very similar to our backbone making them our closest living invertebrate relative,” says Henschke. “Salps are in the subphylum of Tunicata which are part of Chordata, same as humans, while jellyfish are Cnidaria, the same as corals. Salps and jellyfish have separate ancestries, diverging 800 million years ago. They’re evolutionarily very different even though they look similar.”

Unlike jellyfish, they also have complex nervous and digestive systems with a brain, heart, and intestines. Salps feed through a mesh by pumping water through their bodies, whereas jellyfish will swim and capture things in their tentacles. Not only are these jelly blobs ancestrally similar to us, they form large chains of clones which break up to reproduce and then form more chains. So yes, they do sound like aliens!

“There are 45 species of salps. They live in every ocean around the world except the Arctic, with the highest density found in the Southern Ocean,” says Henschke. “Usually jellyfish, and the big blooms we see, are more coastal because they have this benthic polyp stage whereas salps don’t have a benthic stage so they’re in both the open ocean or on the coast.”

Salps are difficult to count because they are fragile and easily damaged by nets. But during a swarm, salps can cover an area up to 100,000 square km, with more than 5000 individuals per m3.

Salps were also thought to be “trophic dead ends” meaning they have little caloric value as food for other species.

“Salps are more nutritious than previously thought. They get eaten by fish, turtles, birds, and shellfish,” says Henschke. “We found 202 species had salps in their guts or seemed to feed on them. It’s hard because they disintegrate quite rapidly, we’re not really sure whether more species eat them or not.”

Salps also contribute to ocean carbon fluxes and may be playing an important role in the biogeochemical cycle.

“They have carbon-rich fecal pellets especially in comparison to other zooplankton. Their fecal pellets are heavier so they sink to the seafloor more rapidly and their bodies sink to the seafloor quickly as well,” says Henschke. “When they occur in these large blooms and then die, they can potentially send this carbon down to the benthos as either a food source or as a carbon flux. It’s a larger influx of food than benthic organisms would normally have. In one salp swarm that has been studied, all of the food — the carcasses and the fecal pellets — could sustain the community in the benthos for six months. It could be a potential long-term food source that we didn’t know about.”

It is now generally thought that overfishing and climate change are leading to larger amounts of jellyfish in the oceans, but Henschke encourages researchers to think about how salps might be affected.

“Jellyfish are easier to study but no one really knows yet how salps will be affected by climate change because they’re really hard to keep in labs,” she says. “Future studies should work on whether they will benefit from climate change or if we will see shifts in their distribution because of different waters becoming more favourable.” 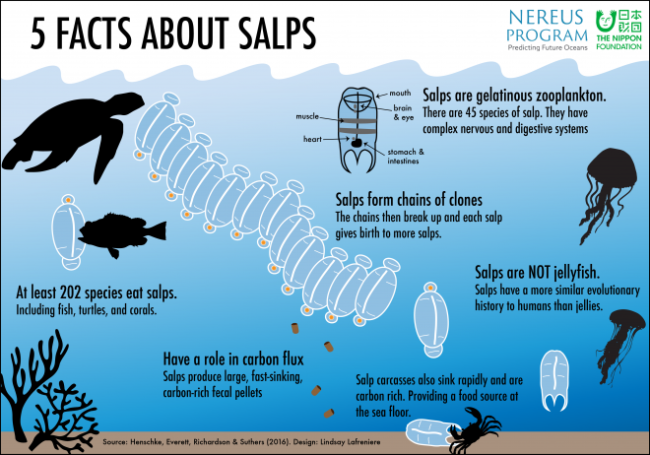