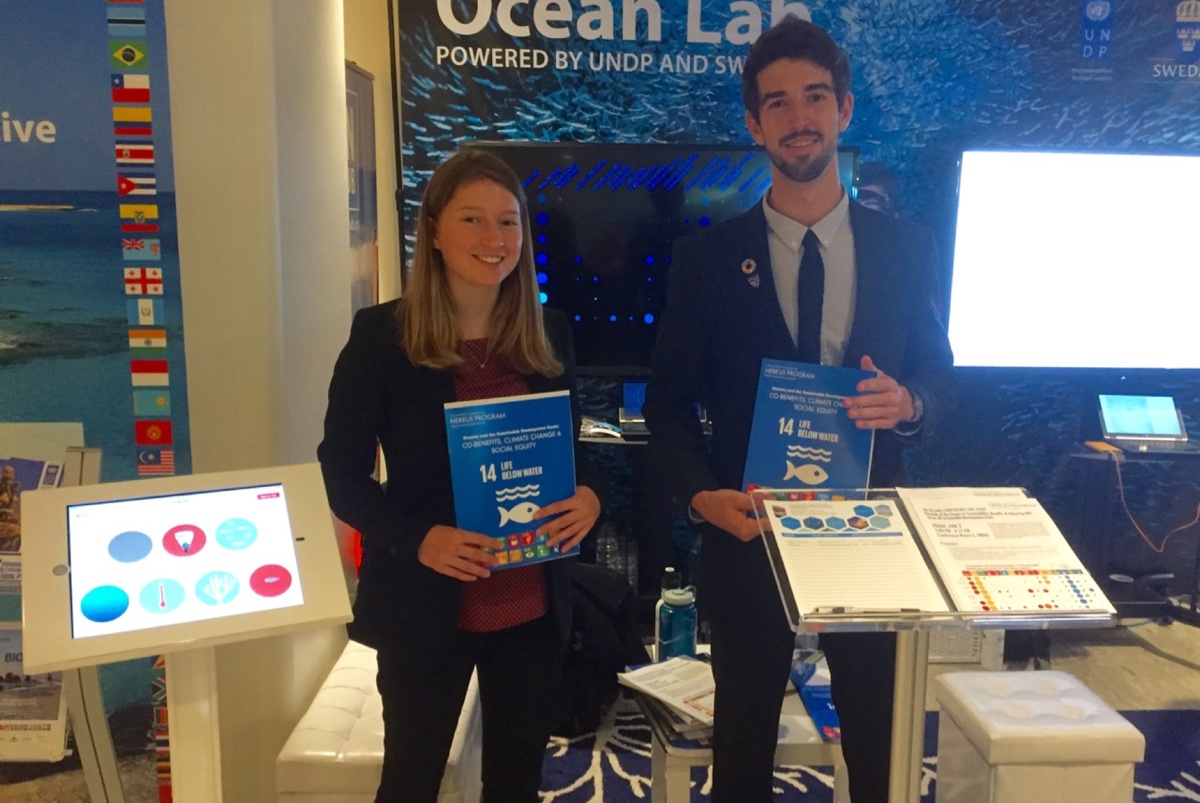 Continuing on the tone set during the first day of the UN Ocean Conference, day two showed the engagement and commitment of many nation states, NGOs, businesses and other stakeholders to achieving SDG 14 ‘Life Below Water’. It featured two important plenary meetings and partnership dialogues addressing targets 14.2 and 14.3: managing, protecting, conserving and restoring marine and coastal ecosystems, and minimizing and addressing ocean acidification. During those meetings, the need for enhanced international cooperation to address the common challenges were emphasized; with, for example countries such as the Soloman Islands, Israel, Tuvalu and Estonia expressing commitments to minimize ocean acidification.

Throughout the day, a plethora of interesting side events were ongoing where stakeholders could come together to discuss shared problems and potential solutions.

The side event ‘The Coral Triangle – Partnerships to Achieve SDG 14 in the World’s Epicenter of Marine Biodiversity’, was an inspiring example of how regional stakeholders can cooperate on shared problems, even in the face of many interlinked challenges. The Coral Triangle, covering the waters of Indonesia, Malaysia, Papua New Guinea, Philippines, Solomon Islands and Timor-Leste, is the world’s epicentre of marine biodiversity and is both of local and global significance in terms of food and income security. Urgent threats such as overfishing, pollution, unsustainable tourism, plastic and debris, illegal trade of species and climate change are, however, taking its toll on the region. The shared threats the coastal and marine resources of the six states within the Coral Triangle face were immediately made clear so that participants of the session could offer and discuss solutions benefitting the region.

The side event ‘Innovative and Sustainable Ocean Based Economy’ was a remarkable event in that it offered presentations both on broad overviews of the problems and solutions for a sustainable ocean based economy, as well as very practical and applicable examples on how to put such an economy in motion.

Sven-Erik Bucht, the Swedish Minister for Rural Affairs, and Douglas Frantz, the OECD Deputy Secretary General, both emphasized the urgency and gravity of chronic illnesses caused by humans such as marine pollution and overfishing, but also guided the attention of the attendees to some important successes. Marine Protected Areas (MPA’s) are increasingly being implemented, sustainable aquaculture is showing great potential and sustainable circular economic models are finding their way into the practices of many businesses, such as Smögenlax in Sweden. The founders of that company went on to give an excellent presentation on how they are implementing the no-waste model into their salmon farming factory: enormous amounts of what usually is treated as ‘organic waste’ within salmon farming are instead being used for proteins, medicine, fish feed, and food supplements. Other outlets include biogas production, which is then used for fertilizers.

This so-called ‘flow model’ (see Figure 1) was an absolutely inspiring example on what is possible when technology becomes available and legislation gives the right incentives. However, as stressed during the presentation of Ms. Felismina Antia from the Government of Mozambique, none of this is possible when countries work in isolation. For example: Mozambique has made 23% of its EEZ into an MPA, but the effect is lost if neighbouring countries do not implement similar policies. Indeed, during the panel discussion, all stakeholders could agree that the scaling-up of innovative ideas and legislation can only work if knowledge and goals are shared amongst all. 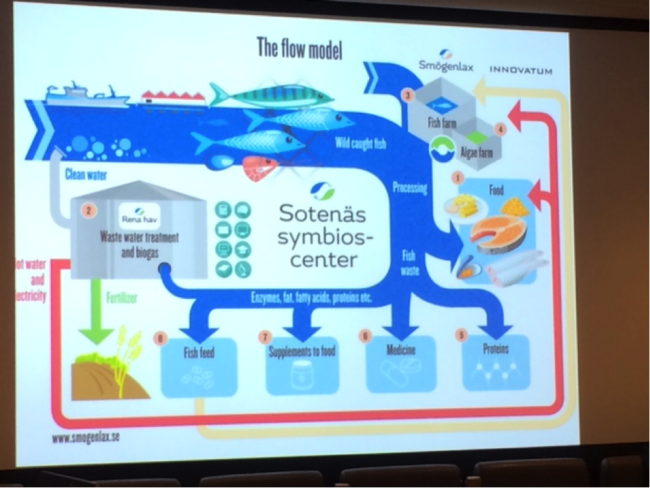 One important discussion point was the Coral Triangle Initiative on Coral Reefs, Fisheries and Food Security (CTI-CFF), a multilateral partnership formed in 2007 involving the six countries. The representative of Indonesia affirmed their commitment to this initiative, giving practical example on how to enhance capacity, outreach and youth engagement in order to strengthen sovereignty, prosperity and sustainability. Dr. Gina Green, the project manager for ECOFISH active in the Philippines, continued along the line of offering hands-on solutions to shared problems. This included the discussion of steps on how to implement projects that can increase fisheries biomass through seasonal closures, and using public-private partnerships to practice ecosystem-based management. Importantly for the region, the role of women in fisheries management was also addressed through a beautiful and inspiring talk given by Rindah Melsen from the Soloman Islands, President of the Women’s Savings Club. Women are the primary users of fishery resources within the Coral Triangle, either directly through fishing, or through cleaning the fish and selling it in the market. She therefore called upon the other stakeholders to, akin to her initiative, enhance the role of women leaders in sustainable fisheries management. 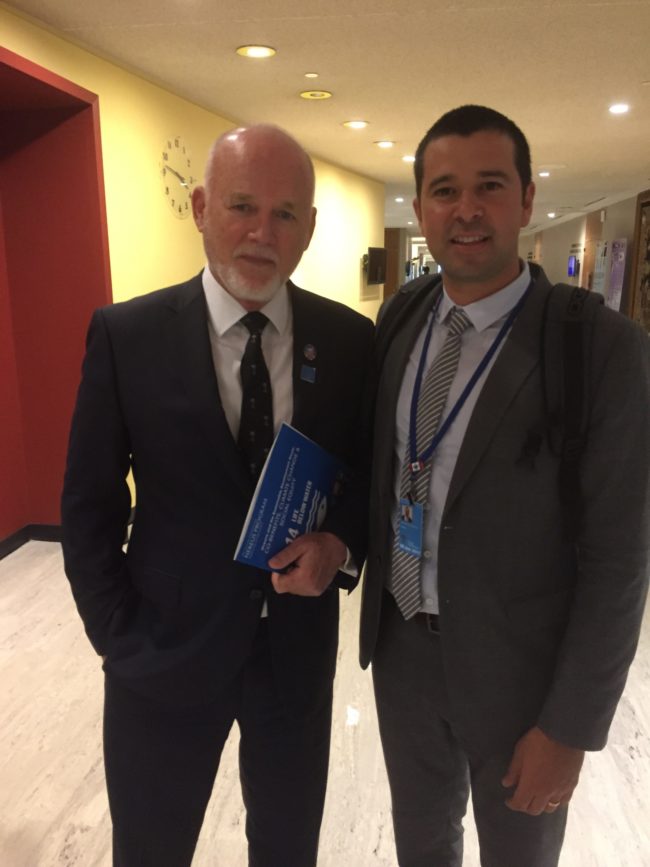 Finally, the remarkable and highly attended session ‘Transnational Organised Crime in the Fishing Industry’ deserves its time in the limelight. The more conventional view of what constitutes a fishery crime is captured in the concept of Illegal, Unreported and Unregulated (IUU) fishing. However, as passionately discussed by a group of excellent panel members, it is increasingly tied to a complex network of larger crimes: drug and arms smuggling, human trafficking, trade in illegal species, money laundering and so on. An impressive talk was given by the Indonesian Minster of Foreign Affairs and Fisheries, Dr. (HC) Susi Pudjiastuti, in which she discussed the destructive impacts of a growing network of maritime criminals in Indonesian waters. Having been bold in her actions in the fight against this pressing problem, she underlined the transnational nature of this issue and the imperative of addressing it through international cooperation. Both Emmanuel Roux, the Special Representative of Interpol to the United Nations, and Aldo Lale-Demoz, the UNODC Deputy Executive Director, discussed pathways on how to address the maritime crimes the Minister had presented. Those included using already existing global legal instruments such as the UN Convention combatting organised crime, or ensuring coordinated responses made by criminal intelligence officers and analysts.

To sum up, it was a day that would make any ocean-pessimist hopeful. All stakeholders expressed deep knowledge of the urgent matters at hand, and an understanding of the interconnectivity and complexity characterizing them. Most importantly, speakers and panellists did not merely talk about issues, but also recognized their shared responsibility to now implement available solutions through active collaboration and participatory processes.

Read coverage from day one of the UN Ocean Conference.

JESSICA SPIJKERS, MSC, SOCIAL-ECOLOGICAL RESILIENCE FOR SUSTAINABLE DEVELOPMENT, Stockholm
ARC Centre of Excellence for Coral Reef Studies (Australia). She holds a Master in European Studies and a Master in Social-Ecological Resilience for Sustainable Development. In her PhD, she seeks to understand where, why and with what social-ecological consequences international conflicts over shared fish stocks occur. She aims to develop scenarios for future conflict under climate scenarios to develop recommendations on how to cope with and adapt to change, how to reduce the risk of conflict, and increase the prospects for sustainable, equitable use of shared marine resources.